These flashcards have been designed for those who want to correctly read, pronounce and alphabetize letters and words in the Devanaagari script of Sanskrit. The ability to read the original script is essential for correct pronunciation. 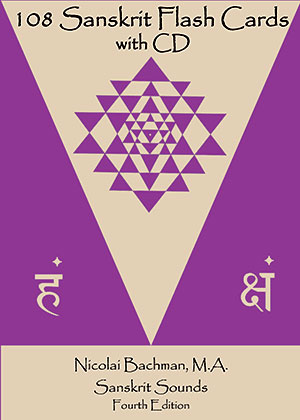 "... should, without doubt, be in the yoga library of every teacher and serious student."

There are 108 colored flashcards and 6 cream-colored cards that surround them, containing reference information.

To promote correct pronunciation only Sanskrit examples are pronounced.

All sounds and examples are repeated twice with space for the student to pronounce. This gives a total of 4 sound impressions per card.

Nicolai Bachman has been teaching Sanskrit, chanting, yoga philosophy, Ayurveda, and other related topics since 1994. He has a knack for synthesizing and organizing complex topics into simple and understandable presentations. His education combines informal, traditional study with the academic rigor of university classes. Nicolai studied extensively at the American Sanskrit Institute, the Ayurvedic Institute, the American Institute of Vedic Studies and the Vedic Chant Center. He holds an MA in Eastern Philosophy, an MS in Nutrition, and is eRYT500 certified. His ongoing studies continue to broaden his repertoire and inform all future classes.