Based on Dr. Lad’s more than 40 years’ Ayurvedic clinical and classroom experience, this 30 card set is sourced from his popular Marma Therapy seminars. 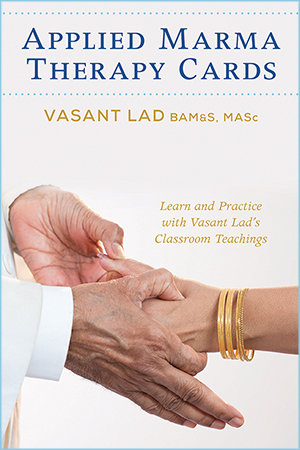 "The Guidelines for Touch and Pressure card gives detailed instructions on marma point therapy techniques as well as contraindications. Finally, Vasant Lad offers a set of balancing holds that combines massage and marma point therapy in a sublime, calming routine."

– Excerpted from "About the Applied Marma Therapy Card Set"

Included in the set are two meditations that Vasant Lad highly recommends. Additionally, instructions on sound therapy that balances the marma points according to the chakras is provided. Marma points useful for emotional healing are outlined as well as the proper essential oils for healing the doshas—vata, pitta, kapha—through marma point therapy.

Available Now! You can Order Here.

Cards are printed on a 16 pt cardstock and coated with a UV protective coating, making them quite durable.