The Reprint of a Classic...

Robert E. Svoboda merges an Eastern and Western integrative approach to Ayurveda with practical, authentic teachings in this guide to understanding Ayurveda in daily life. A thorough exposition on Ayurveda, this book includes all aspects of this ancient wisdom. Starting with the origins of Ayurveda, you are taken on a journey of discovery in personal health. Learn about the unique perspectives Ayurveda has on anatomy, food, daily routine, diagnosis and pathology and their remedies of herbs, minerals and purification. India's traditional medicine addresses the well-being of the entire being - physical, psychological and spiritual - in an approach to health and healing that is as relevant to the modern world as it was to the ancient world from which it emerged. 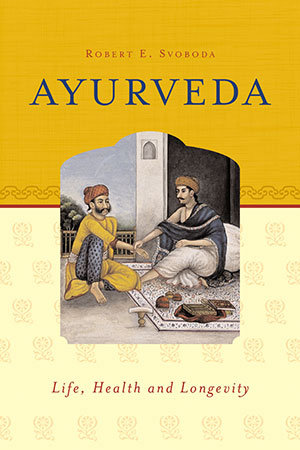 Table of Contents and Chapter One

"Dr. Svoboda literally embodies the wisdom of Ayurveda. He is a spiritual seeker and practitioner of the highest order and lives in that most rare of worlds...one that exists in perfect balance, here mystical and medical become one."

– Krishna Das spiritual vocalist in the bhakti yoga tradition, creator of five CDs including Breath of the Heart, Pilgrim Heart, and Door of Faith, which bring to the West his unique approach to the practice of devotional chanting.

"This book is probably the best of its kind on the market. Ayurveda is one of the best systems for self-healing and the author does not just present an authentic introduction to Ayurveda, but also gives the keys to understand its application in our lives. I recommend it to all my students."

"In this book Dr. Svoboda has beautifully explained the history of Ayurveda, its basic principles and applications in our daily lives. Following these will help to expand the scope of your life, including your mental and physical health as well as longevity. Reflecting Dr. Svoboda's Eastern and Western integrative approach to Ayurveda, this book is a practical guide for the student and layperson alike."

– Vasant Lad, BAM&S, MASc Ayurvedic Physician, author of Ayurveda: The Science of Self-Healing, Textbook of Ayurveda, and many others as well as an internationally known teacher, lecturer and founder of The Ayurvedic Institute in Albuquerque, New Mexico.

"This life is the only life you, as yourself, will ever have, and you owe it to yourself and to the world to make the best of yourself. The practical Charaka condenses the four Vedic aims of life--right livelihood, pursuit of wealth, enjoyment of desire and realization of the transitory nature of existence--into three pursuits: the pursuit of life, the pursuit of wealth and the pursuit of the afterlife."