A Cookbook with Herbal Healing Tips from the Kitchen!

Ayurveda, the ancient healing art of India, teaches that food plays an essential part in one’s health and sense of well-being. Here is an authentic guide of the Ayurvedic approach to food and tasty vegetarian cooking. The recipes are formulated using herbs and spices to help balance the constitution of each person. The effects of the foods on individual constitution is included with every recipe together with the medicinal properties of many of the foods. This is a cookbook and much more. 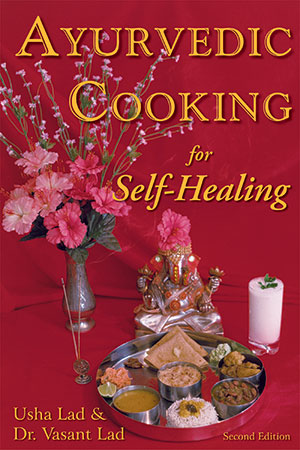 Included in this book are chapters on:

These important sections provide even more benefits from Ayurveda:

From the kitchen of Usha and Vasant Lad come their favorite recipes. Passed along through both their families, these recipes are examples of balanced, tasty food from a long line of vegetarian cooking. Experience the health benefits of Ayurvedic cooking.

My mother was born in Khandala, India, a small town of beautiful green hills. She grew up in Pune, and attended the nursing school affiliated with the Seth Tarachand Ramnath Ayurvedic Hospital, a teaching institute, then attached to Pune University. It was here that she met my father. My mother watched her mother cook for the family and this started her interest in food. At the nursing school, she learned about the Ayurvedic approach to healing and that a good diet is essential. Usha is known for her loving and intuitive approach to food.

My father was born in Pune, India. As a child he loved drawing and painting but, as a teenager and determined to become an artist, his father convinced him to be a healer. My father’s love of art can be seen in the illustrations in this book. Dr. Lad attended Tilak Ayurvedic Medical College in Pune. He stayed on at this college to teach and eventually became the Residential Medical Officer at the college hospital. He is now Director of The Ayurvedic Institute in Albuquerque, New Mexico. He loves to show people the beauty of Ayurveda, the mother of all healing. My father is author of Ayurveda: The Science of Self-Healing, Secrets of the Pulse: The Ancient Art of Ayurvedic Pulse Diagnosis and co-author of The Yoga of Herbs.

Vasant Lad, BAM&S, MASc, Ayurvedic Physician, brings a wealth of classroom and practical experience to the United States. A native of India, he served for three years as Medical Director of the Ayurveda Hospital in Pune, India. He was Professor of Clinical Medicine at the Pune University College of Ayurvedic Medicine for 15 years. He holds a Bachelor’s of Ayurvedic Medicine and Surgery (BAM&S) degree from the University of Pune and a Master’s of Ayurvedic Science (MASc) degree from Tilak Ayurved Mahavidyalaya. Vasant Lad’s academic and practical training include the study of Allopathy (Western medicine) and surgery as well as traditional Ayurveda.