Secrets of the Pulse: The Ancient Art of Ayurvedic Pulse Diagnosis, 2nd Ed.

The Philosophical and Fundamental Principles of Ayurveda

Thousands of years ago, Ayurveda described multiple levels of the radial pulse that could be used to interpret the status of the organs and systems of the body as well as the mental and physical constitutions of the individual. As the first text on pulse diagnosis for the Western student, this book provides a method by which anyone can learn to read his own pulse. Imbalances and potential disease states can be detected in their early stages, giving one the opportunity to correct them before they affect the quality of life. With practice and guidance, one can acquire the proficiency to use this knowledge to heal self and others.

This new edition contains revisions and expanded descriptions that developed in response to the questions and feedback of the many students and teachers who use this book in Ayurveda schools and clinics around the world. 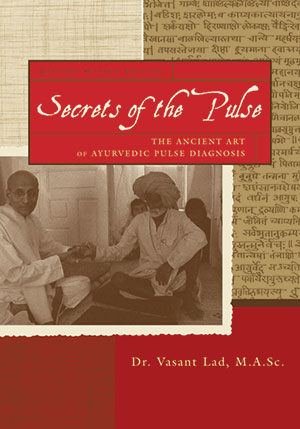 Table of Contents and Chapter Two

"Secrets of the Pulse offers practical teachings on pulse analysis that Vasant Lad, MASc, received from his guru. It describes a unique assessment method that enhances a practitioner’s sensitivity and awareness and helps to cultivate the ability to directly perceive fundamental issues affecting the body."

"The ancient Vedic wisdom came from the caves and mountains of India, where the rishis had ashrams and disciples. Students came to study in the guru’s home. The rishis imparted knowledge as they experienced it in a deep state of meditation. These early teachings were an oral tradition and, because there were no books, the students stored the knowledge in their brains and it became a part of them."

Excerpted from Chapter One,
“Nadi Vijnanam: The Art of Reading the Pulse

For those who already own the book, details of the changes found in the 2nd edition from 2006 are listed below.

There is an error in the table on Page 34 in the 2006, 2nd edition printing. (The 2009 and all subsequent printings have the correct text.) The accompanying illustration on page 35 IS correct. The table should read as follows:


PDF Version, fits exactly over the current table. Just print and paste it on!

Vasant Lad, BAM&S, MASc, Ayurvedic Physician, brings a wealth of classroom and practical experience to the United States. A native of India, he served for three years as Medical Director of the Ayurveda Hospital in Pune, India. He was Professor of Clinical Medicine at the Pune University College of Ayurvedic Medicine for 15 years. He holds a Bachelor’s of Ayurvedic Medicine and Surgery (BAM&S) degree from the University of Pune and a Master’s of Ayurvedic Science (MASc) degree from Tilak Ayurved Mahavidyalaya. Vasant Lad’s academic and practical training include the study of Allopathy (Western medicine) and surgery as well as traditional Ayurveda.

The author of numerous books, Vasant Lad is respected throughout the world for his knowledge of Ayurveda. Vasant Lad has written 13 books on Ayurveda as well as hundreds of articles and other writings. With over 700,000 copies of his books in print in the US, his work has been translated into more than 20 languages.