A Seasonal Detoxifying and Rejuvenating Program for the Body, Mind and Consciousness

Based on one of his most popular articles from the quarterly journal, Ayurveda Today, Vasant Lad shows you how to do a seasonal cleanse that will keep you feeling balanced, vibrant and relaxed. Designed to be used at the time of seasonal transition, each season has specific dietary programs. Additionally, there are separate plans for each dosha type to follow for maximum benefit. If you don’t know your constitutional makeup, there is a generic program as well. Like traditional panchakarma, this program includes a post-cleanse rejuvenation plan as well.

Taking the time to care for your health enhances your self-reliance and vitality as well as your mental clarity. Enjoy the benefits of this relaxing cleanse. 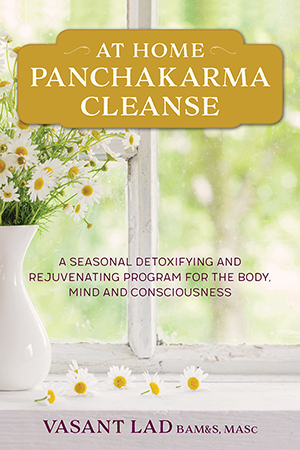 Vasant Lad, BAM&S, MASc, Ayurvedic Physician,  brings a wealth of classroom and practical experience to the United States. A native of India, he served for three years as Medical Director of the Ayurveda Hospital in Pune, India. He was Professor of Clinical Medicine at the Pune University College of Ayurvedic Medicine for 15 years. He holds a Bachelor’s of Ayurvedic Medicine and Surgery (BAM&S) degree from the University of Pune and a Master’s of Ayurvedic Science (MASc) degree from Tilak Ayurved Mahavidyalaya. Vasant Lad’s academic and practical training include the study of Allopathy (Western medicine) and surgery as well as traditional Ayurveda.