THE HIDDEN SECRET OF AYURVEDA is an excellent introduction and overview of the profound, ancient Indian healing system known as Ayurveda. This book gives the reader a chance to sense the working principles of Ayurveda, and see how Ayurveda can be adapted and integrated into life in a practical way, for today’s health needs. The word Ayurveda can be translated as “the knowledge of life” or more correctly as “the knowledge of longevity”. Ayurvedic healing looks at the whole person—the body, the mind, and the spirit—and helps to develop an individual program to bring balance, good health and at least a taste of immortality. 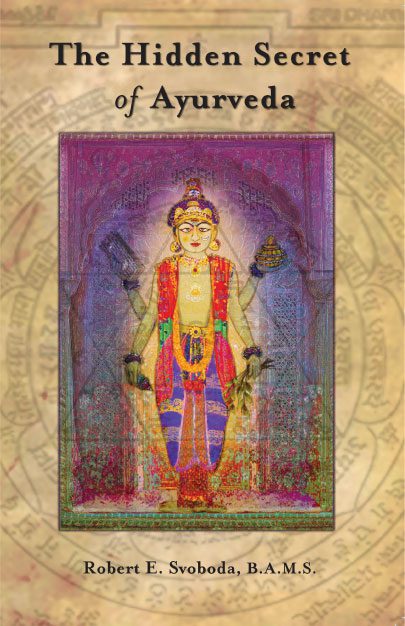 “In this book Dr. Svoboda has beautifully explained the history of Ayurveda, its basic principles and applications in our daily lives. Following these will help to expand the scope of your life, including your mental and physical health as well as longevity. Reflecting Dr. Svoboda’s Eastern and Western integrative approach to Ayurveda, this book is a practical guide for the student and layperson alike.”

– Vasant Lad, BAM&S, MAScAyurvedic Physician, author of Ayurveda: The Science of Self-Healing, Textbook of Ayurveda, and many others as well as an internationally known teacher, lecturer and founder of The Ayurvedic Institute in Albuquerque, New Mexico.

“Ayurveda is the ultimate in holistic sciences because it takes into account all the important natural forces which act on the human being.”

–from The Hidden Secret of Ayurveda